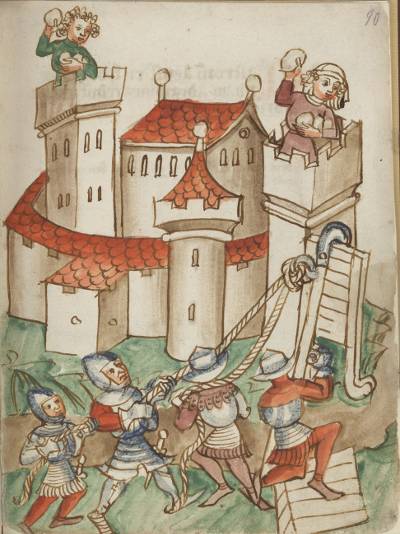 The Historical Archive of the City of Cologne is one of the most important European municipal archives north of the Alps, Cologne city memory and information store for science and research from all over the world. Documents and records of the municipal administration from the beginnings in the Middle Ages to the present day, together with numerous bequests of important personalities and collections, form a dense collection of documents that provides answers to numerous questions about the history of Cologne and the Rhineland.

In addition to the municipal records, the Historical Archive houses 65,000 documents, almost 2,000 manuscripts, plans and photographs covering a total of around 30 kilometres and a wide range of evidence from more than 1,000 years of regional and national, even European history. For example, the archive has originals by Albertus Magnus, Napoleon Bonaparte, Jacques Offenbach, Giuseppe Verdi, Karl Marx, Heinrich Böll and Konrad Adenauer.

The three monastery holdings made available here in the Archivportal as a first step (order 217 Graloch, order 237 Klein Nazareth, order 261 Reinold) were transferred on 27 October 1949 as a permanent loan from the former Main State Archives in Düsseldorf (today's Landesarchiv NRW in Duisburg) to the holdings of the Historical Archives of the City of Cologne. Here they are representative of almost 70 other holdings of former Cologne monasteries, convents and convents, which contain numerous testimonies of spiritual life, from the Middle Ages to the dissolution of institutions (secularisation) by the French occupying powers in the years 1802-1803. Together with the urban tradition, the monastery holdings are of central importance for historical urban research.

The fact that the holdings are now located at the HAStK is a notable exception. In the course of history, large parts of the tradition of the secularised clerical institutions have found their way into the holdings of the respective state archives and remained there.